Not long ago, I wrote a blog post about Abusing the COM Registry Structure: CLSID, LocalServer32, & InprocServer32.  In that previous post, a few interesting techniques were discussed such as abandoned registry key discovery, COM hijacking, lateral movement, defensive evasion, application whitelisting bypass, and situational persistence.  In this follow-up post, we will take it a step further and focus on a few other hijack methods and evasive loading techniques.  Topics include:

In order to load and execute a COM payload without registration, an attacker must influence the COM registry structure.  A way to do this is through a technique called COM Hijacking.  One of the best definitions for COM Hijacking comes from the Mitre ATT&CK Framework:

“The Microsoft Component Object Model (COM) is a system within Windows to enable interaction between software components through the operating system.  Adversaries can use this system to insert malicious code that can be executed in place of legitimate software through hijacking the COM references and relationships as a means for persistence. Hijacking a COM object requires a change in the Windows Registry to replace a reference to a legitimate system component which may cause that component to not work when executed. When that system component is executed through normal system operation the adversary’s code will be executed instead.  An adversary is likely to hijack objects that are used frequently enough to maintain a consistent level of persistence, but are unlikely to break noticeable functionality within the system as to avoid system instability that could lead to detection.”

InprocServer32 and LocalServer32 (along with InprocServer and LocalServer) key-values are the references points for the COM servers (e.g. DLLs, CPLs, EXEs, and OCXs).  After an attacker discovers a (vulnerable) reference, the attacker can drop a payload in place of the abandoned referenced path to the Portable executable (PE) under the right conditions (e.g. writable path).  That PE payload will simply load if called by an invoker (e.g. Loader or by program in execution that references the COM key)  as it attempts to instantiate the (potentially false) COM object under the CLSID entry point.  Let’s briefly revisit the VMware vmnetbridge.dll example from our previous post.

In this example, the use case is driven by COM keys that were left over (unregistered) by the VMware Workstation uninstaller application.  After unning a recon script, we discovered that a LocalServer32 key path to a DLL that was previously removed.  An attacker can simply replace the binary to hijack the COM node structure as demonstrated in the following screenshots:

Overriding a COM object is likely a more practical method for influencing a COM structure payload.  By adding the proper registry keys in the HKCU Registry hive, keys located in HKLM are overridden (and ‘added’ to HKCR) when referencing the target COM object.  In this “SqibblyDoo” example provided by Casey Smith (@subTee), the “scripting.dictionary” COM program identifier (ProgID) is hijacked with a different class identifier (CLSID) after importing the following registry import file:

Effectively, any program or script that instantiates the “scripting.dictionary” COM program or attempts to load the hijacked class identifier will invoke the payload.

Another way to influence alternate COM payload loading is with the TreatAs key, which effectively serves as a shortcut (or link) to another (unregistered) CLSID key.  Many (native) Windows programs have dangling references to non-existent registry CLSID nodes (*Note: These dangling references can be identified with the ProcMon tool from SysInternals).  Depending on the CLSID key and program load, a properly hijacked CLSID node structure with a TreatAs reference serves as its own loading technique if and when that CLSID key is referenced (such as at program or script launch).  In essence, an attacker can take advantage of this by:

*Note: This is a good place to give a shoutout to Jason Lang (@curi0usJack) from TrustedSec on the topic of identifying and leveraging these unreferenced COM paths.  Jason did a great job covering this topic in the TrustedSec Purple Team training course at BlackHat 2018.  Also, Check out the blog post Beyond good ol’ Run key, Part 84 by Adam (@Hexacorn) for a primer on TreatAs Instantiation Hooking.

As highlighted in earlier sections of this blog post, script and programs that attempt to instantiate or call the class and/or program identifiers of a hijacked COM node will (likely) load the alternate payload at some point during execution.  The art of overriding or linking to a malicious COM node pretty much comes down to a few factors: 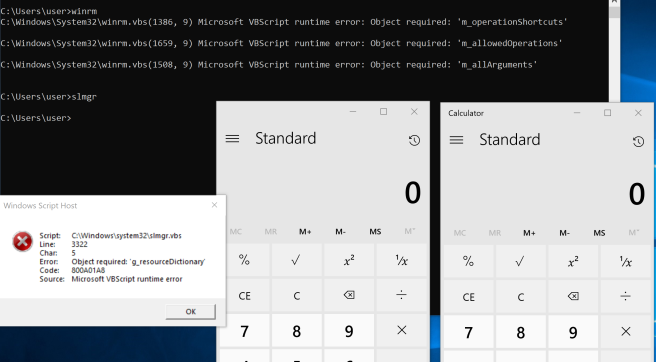 *Note: Not every hijacked path will cause (visible) programmatic failure.  There are many seamless, hijack-able paths that do not negatively impact program flow.  Some of these paths also qualify as stealthy persistence techniques.

As described in the previous post, one method for invoking a payload via the CLSID key (or PROGID) is by leveraging the lesser-known -sta (single threaded apartment) switch in rundll32 as follows:

The -sta switch is not very well documented, but it does have utility and is a vector for potential abuse.  In the following example, we leverage this technique to demonstrate direct and linked (“TreatAs”) COM loading as described in an earlier section:

We can also call our hijacked COM node by the Program Identifier (ProgID) with rundll32:

In the context of AutoRuns logon persistence, the rundll32 command will not evade filters, but it can be deceptive by masking the hidden registry payload:

A few years ago, Matt Nelson (@enigma0x3) wrote about Userland Persistence with Scheduled Tasks and COM Handler Hijacking.  In his post, Matt describes a process for identifying interesting Scheduled Tasks that have an action set to “Custom Handler.”  When reviewing the XML schema file of the Scheduled Task, the “action context” is actually a “COM handler” represented by a CLSID.  After hijacking the CLSID structure, an actor can simply supply a payload.  When the Scheduled Task is run (e.g. at logon), the malicious payload is executed.

Verclsid.exe is “used to verify a COM object before it is instantiated by Windows Explorer” (Microsoft Docs), which is quite interesting in its own context.  Nick Tyrer (@NickTyrer) demonstrates the following Verclsid usage in this Github gist:

Running the previous command with the proper CLSID invokes the following payload in this example:

Xwizard is another interesting way to load a CLSID node as documented by Nick Tyrer.  @harr0ey demonstrates usage of the following command that does not pop an error message:

*Note: Verclsid.exe has been used in a phishing malware campaign as documented in this post (Red Canary).

There are many built-in Windows binaries that have the capability to ‘double’ as COM/DCOM servers under the applicable context for the intended service (such as remote machine management).  After proper invocation and instantiation,  a D/COM applications exposes its properties and methods when called with the -Embedding switch [*better validation needed*].  However, an interesting “side effect” is that (many) COM-enabled applications that have GUI/visible window components (e.g. mmc.exe, mspaint.exe, winword.exe, iexplore.exe, etc.) will run in a server mode without presenting the GUI components.  Let’s take a look at an example use case where this *might* have some utility –

The MMC utility may be a Windows system administrator’s best friend due it its extensibility and functionality.  The MMC allows a (power) user to add multiple management ‘snap-ins’ to locally and remotely manage Windows systems.  The utility also provides an attack surface for *potential* misuse and abuse.  Early last year, Matt Nelson (@enigma0x3) discovered that MMC exposes a method that can be used to facilitate remote command execution over the DCOM protocol.  In his Lateral Movement using the MMC20.Application COM Object blog post, Matt describes the technique in greater detail.

Though not nearly as exciting as the remote command execution/lateral movement technique, MMC can be used to invoke CLSID payloads for evasive loading and Run Key persistence.  Let’s setup our MMC console file to demonstrate this example…

First, we need to setup a CLSID link and save our configuration as a console file (.msc).  We can setup our basic payload by opening the MMC and the “Add/Remove Snap-In” window.  For simplicity, select “the Link to Web Address” snap-in to open the wizard, and input the hijacked/reference CLSID key for the “Path or URL” as shown in the following screenshot:

Next, create a name for the snap-in and select ‘Finish’ as shown in the following screenshot:

With our payload configuration created and enabled, let’s save the console as ‘test.msc’. Ensure that the snap-in label is selected (e.g. test) to preserve the console state.  If this is not selected, our payload will not invoke when we attempt to open the console file later on.

For good measure,  we can open up the console file within a text editor to verify that the configuration and CLSID pointer value – 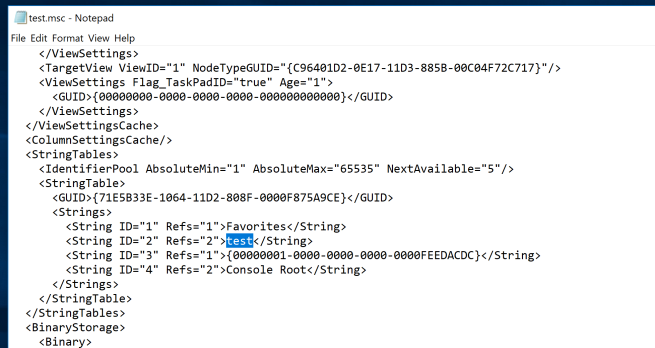 With this saved console file, let’s launch the msc file from the command line and invoke the CLSID payload in a hidden manner with the -Embedding flag (*Note: case is important) –

From an AutoRuns persistence perspective, mmc.exe will evade default filters because it is a Windows signed binary as demonstrated in the following screenshot:

Removing the filters, we now see the entry: 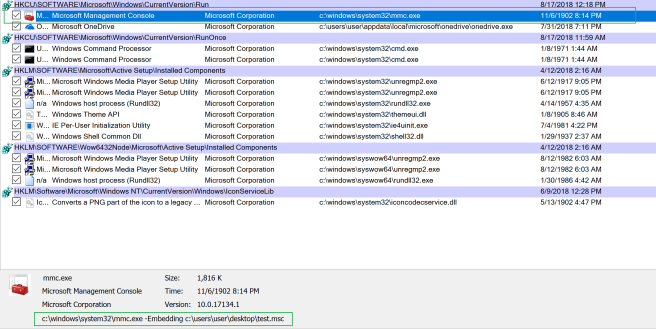 At logon, this is the resulting payload execution with our hijacked key and reference:

All things considered, mmc.exe may not be the most effective use case.  However, other COM binaries may have greater utility when invoked in a similar manner.

Thank you for taking the time to read this post.  Stay tuned for the final part of this series where we will discuss a few more advanced techniques!

View all posts by bohops